At a crossroads, different roads intersect, and one must choose a path.

Four short pieces of Irish theatre (accompanied by live traditional Irish music) exploring the consequences, both social and personal, of the choices one makes at the crossroads of dreams, chance, and time.

Ithaca, adapted from the penultimate chapter of James Joyce’s Ulysses, depicts the chance meeting of the novel’s two wandering protagonists, Stephen Dedalus and Leopold Bloom, after a long midsummer’s night of debauchery in Dublin’s bars and brothels.

Molly Bloom, Leopold Bloom’s plain-spoken and sensuous wife, reflects on the choices she has made in love and marriage in a frank, bawdy, lyrical stream-of-consciousness monologue adapted from Penelope, the final chapter of Ulysses.

In a poignant scene from playwright Brian Friel’s Translations, a young English soldier is assigned to a remote Irish-speaking village to record place names for the first mapping of the area in 1833.  Despite cultural and linguistic complications, he dreams of settling in this place with these people; while his Irish translator Owen struggles with his decision to leave the village and change his fortunes, a path that circuitously continues to bring him back to the very place he left.

A hotel room outside Dublin is the setting for Nancy Harris’s contemporary play, Love in a Glass Jar, which explores a modern woman’s battle against her biological clock, her decision to conceive in an unconventional way, and the man she has found on the Internet with the ability to help her.  This was the North American premiere of the play.

Crossroads was a fundraiser to support the work of the Irish International Immigrant Center (IIIC) in assisting immigrants from all parts of the world to integrate into American society.  iiicenter.org 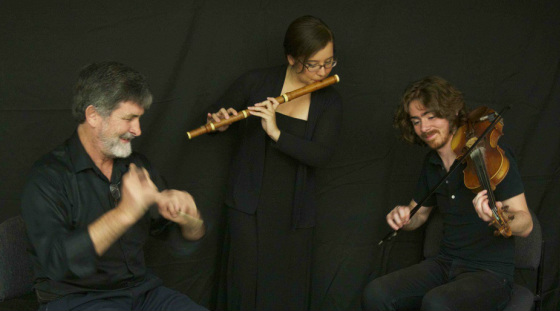