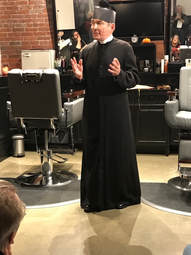 Donal O'Sullivan as Fr. Arnall, from "A Portrait of the Artist as a Young Man", performed in a Barbershop!
Lit Crawl Boston, October 2017

The Complete Works of James Joyce in 44 minutes – with Music!

For this year's Lit Crawl, The Here Comes Everybody Players performed excerpts from Dubliners, Finnegans Wake, A Portrait of the Artist as A Young Man, Exiles and Finnegans Wake

Lit Crawl Boston 2017 - the second annual night of irreverent literary programming in Boston’s Back Bay.  From 6:30 to 9:30 p.m., intrepid readers could choose from a variety of unique literary events including games, performances, provocations and other oddities, all in surprising venues ranging from cafes and art galleries to barbershops and shoe stores.

Counterparts
From Dubliners, Joyce's first book of prose, fifteen short stories about people and society of his native Dublin, circa 1900.

Shem, Shaun and Anna Livia
Two brothers and their mother are three of the main characters in Finnegans Wake, acknowledged by many as Joyce’s most complex and radical work.

Fr. Arnall’s Sermon
From A Portrait of the Artist as a Young Man, a novel based on his days as a schoolboy and University student.

Exiles:
The concluding scene of Joyce's only play, featuring husband and wife, Richard and Bertha, recently returned to Ireland from Italy.

The Foresters Wedding
One of several parodies from Ulysses, probably his best-known work, showing his imagination and sense of humor.