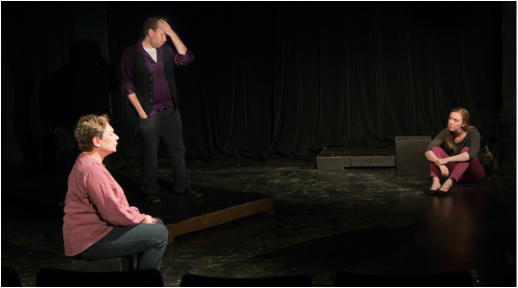 With Rachel Sacks, Jean Sheikh and Josh Way
Terminus premiered at Dublin’s Abbey Theatre in 2007.  In 2011 it was performed in Boston by the Abbey Theatre  as part of a tour to the US, Australia and the UK.

Some Reviews of previous productions of Terminus

Author Mark O’Rowe —  presents us with a virtuoso piece of writing delivered, astonishingly, in rhythmic rhyme, not unlike rap but not unlike Shakespeare.  It’s like James Joyce in the hands of Eminem.

“… we go, see the slo-mo ebb and flow; the mill, the babble, the rabble of wobbling waywards, exiled and aimless, unlike us as, purposeful and double-file, like kids on a dare, we head who the hell knows where.”

Terminus is thrilling, terrifying theatre at its best. Haunting and provocative, it is shockingly good and should not be missed.
Billy Cantwell, The Irish Echo

…brutal plays that are so packed with energy and verve that they can leave an audience dizzy.

…a dense, musical brand of colloquial poetry that sounds like a mix between Jay-Z and Tom Wolfe on a gonzo riff: “We go, see the slo-mo ebb-and-flow of pub-spill; the mill, the babble, the rabble or wobbling waywards.”
Jason Zinoman, The New York Times

Gritty details, grotesque flourishes and internal rhymes pour from Mark O'Rowe's characters with a velocity to match the ferocity of his narrative in "Terminus," a tale of the seamier sides of Dublin…Poor choices meet good and bad intentions with fatal, fantastical and even Faustian results in the intersecting stories spun by two women and one man.

As a playwright:
As a screenwriter: 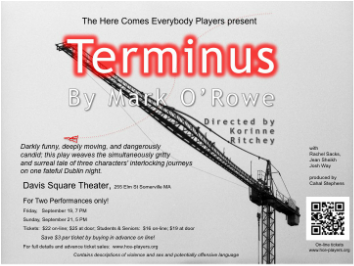